Home > Back to Search Results > Centennial of the 4th of July...
Click image to enlarge 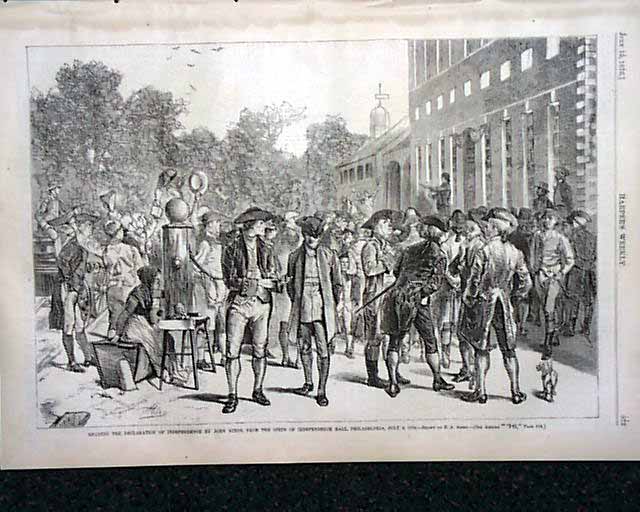 Centennial of the 4th of July...


HARPER'S WEEKLY, New York, July 15, 1876  The full front page is a print of a Revolutionary War era soldier in uniform & with a tricorne hat, captioned: " '76". Inside prints include: "The Poet & Orator of the Centennial Fourth of July" showing Bayard Taylor and William Evans; a full page: "Reading the Declaration of Independence by John Nixon, from the Steps of Independence Hall, Philadelphia, July 8, 1776", a doublepage centerfold by famed political cartoonist Thomas Nast: "The Nation's Birthday", a full page: "De Jubilee Am Come--Fourth of July, 1876" showing African-Americans. Also prints of: "The Democratic Candidates for President & Vice-President" being Samuel Tilden and Thomas Hendricks.
Included also is the Supplement issue which has a full page and centerfold print relating to the nation's centennial.
Complete in sixteen pages plus the four page Supplement.