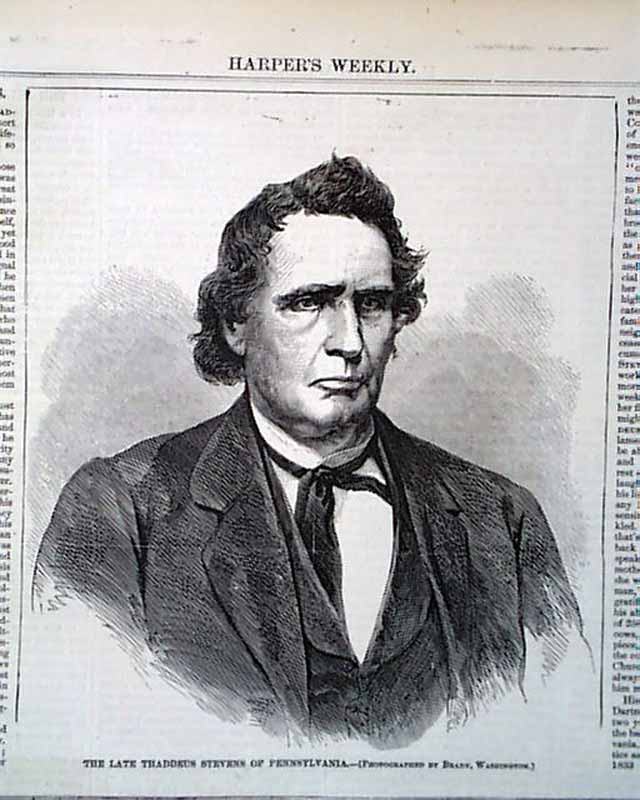 
HARPER'S WEEKLY, New York, August 29, 1868  The full front page of the issue is of the illustration entitled 'Body of Thaddeus Stevens Lying in State at the Capitol, Washington' with several Black soldier guards. A text articles on "Thaddeus Stevens" and a halfpage 'Scene at the Deathbed of Thaddeus Stevens' and one-third "The Late Thaddeus Stevens of Pennsylvania" are within the issue.  A doublepage centerfold: 'The Cattle Plague' shows 6 scenes. Also included is a full page illustration  'Methodist Camp Meeting at Sing-Sing, N.Y.'  A nearly half-page illustration "'Fun or Mischief"' is of a little girl, fun or frolic, as stated in the small accompanying article. The halfpage illustration "Wreck of the Bark 'Henry Trowbridge'" features an associated article.
Complete in 16 pages and contains additional prints and related text.

Ice Bridge over Niagara Falls... The ...