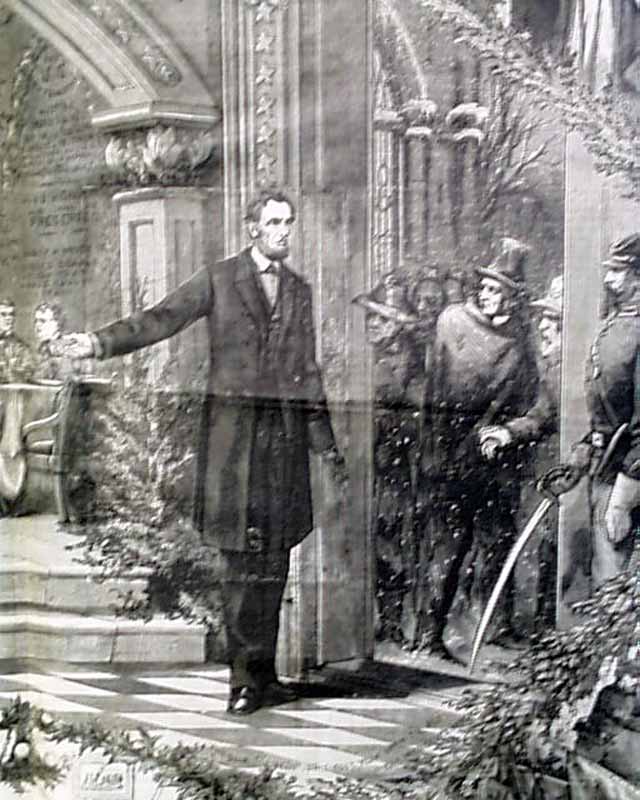 HARPER'S WEEKLY, New York, Dec. 31, 1864  The full front page shows children in a bedroom playing with Christmas gifts and toys while the parents watch from the doorway.
The very ornate doublepage centerfold by Thomas Nast is titled: "The Union Christmas Dinner" and shows President Abraham Lincoln welcoming Confederates to dinner, with a long table in the background and empty chairs with the abbreviations of the Confederate states on the backs of them. There are smaller Civil War-related vignettes in each corner of the print.
Other war prints within the issue include: "General Warren's Raid--The Fifth Corps Tearing up the Weldon Railroad North of Jarret's Station" & "...Destruction of the Weldon Railroad North of Jarret's --  Burning of Ties & Rail". There is also a full page with 3 more prints relating to the Weldon Railroad: "...Destruction of Water Tanks at Jarret's Station" & "...Soldiers Making a Greek Cross (The Fifth Corps Badge) Out of the Heated Rails on the Weldon Railroad" & also "Chase & Capture of the Blockade-runner 'Armstrong' by Our Gunboats".
A nearly halfpg. shows: "Army of the Cumberland--Nashville & Its Fortifications" as well as: "The U.S. Monitor 'Neosho' Engaging Three Rebel Batteries on the Cumberland, Below Nashville" & "Porter's Fleet Leaving Fortress Monroe". There are also two small maps; "The Field of General Sherman's Operations Around Savannah" & "Map of Nashville, Tennessee, Showing the Field of Operations of General Thomas".
The back page has a cartoon: "A Hint to Young Ladies". Complete in 16 pages.