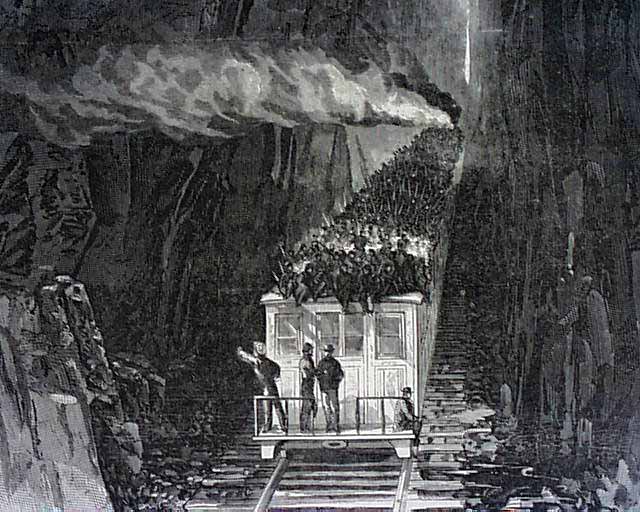 
HARPER'S WEEKLY, New York, November 7, 1863  The entire front page is taken up with a print: "The Army of the Cumberland--A Troop Train Passing Through the Big Cut on the Louisville and Nashville Railroad". Within the issue are a full page of: "Our Russian Visitors; full page: "The Soldier's Dream"; "Rebel Batteries at New Inlet, Wilmington, North Carolina, as Seen From the United States Steam Sloop 'Iroquis' " Works Thrown up Near the Railroad Bridge Over the Rappahannock"; "The Army of the Potomac--Gamblers at the Provost Marshal's Headquarters" "Gamblers, Thieves, and Vagabonds--A Scene in Washington".
The doublepage centerfold is taken up with 3 prints: "The Army of the Potomac--General Warren Repelling Heth's Attack at Bristoe Station--Hazard's Rhode Island Battery in the Fore-Ground" and "Burning the Rappahannock Railway Bridge" and "Straggling Soldiers Crossing the Rappahannock Above the Burned Bridge".
The back page has a cartoon: "Shutting Up Shop." Complete in 16 pages.