Home > Back to Search Results > Winslow Homer's vision of Thanksgiving during the Civil War...
Click image to enlarge 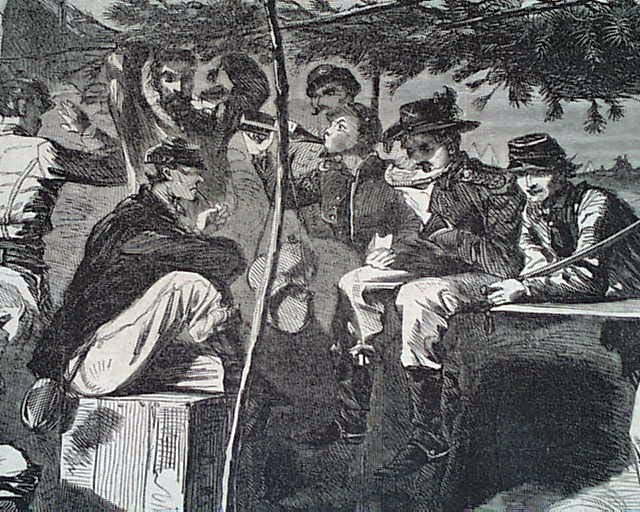 Winslow Homer's vision of Thanksgiving during the Civil War...


HARPER'S WEEKLY, New York, Nov. 29, 1862  The most desired print in this issue would be the very nice full page by noted artist Winslow Homer titled: "Thanksgiving In Camp".
The front page has a nice portrait of: "Major-General A. E. Burnside, Commander of the Army of the Potomac" with an article on him. Other prints inside include: "The Army of the Potomac--Thoroughfare Gap" "Warrenton, Virginia" "McClellan's Adieux to His Officers at Warrenton, Virginia" "The 'Passaic' Trying Her Large Gun at the Pallisades..." "Launch of the British Iron-Clad Screw Frigate 'Caledonia', 34 Guns, at Wookwich".
The nice doublepage centerfold shows: "Gen. McClellan Taking Leave of His Army' before a large, cheering crowd of soldiers. Other prints include: "The Advance Guard of the Army of the Potomac Attacking the Rebels Near Snickersville".
The back page has two political cartoons: "Old Mother Buchanan at Wheatland" & "Another Diplomatic Mess". Complete in 16 pages.