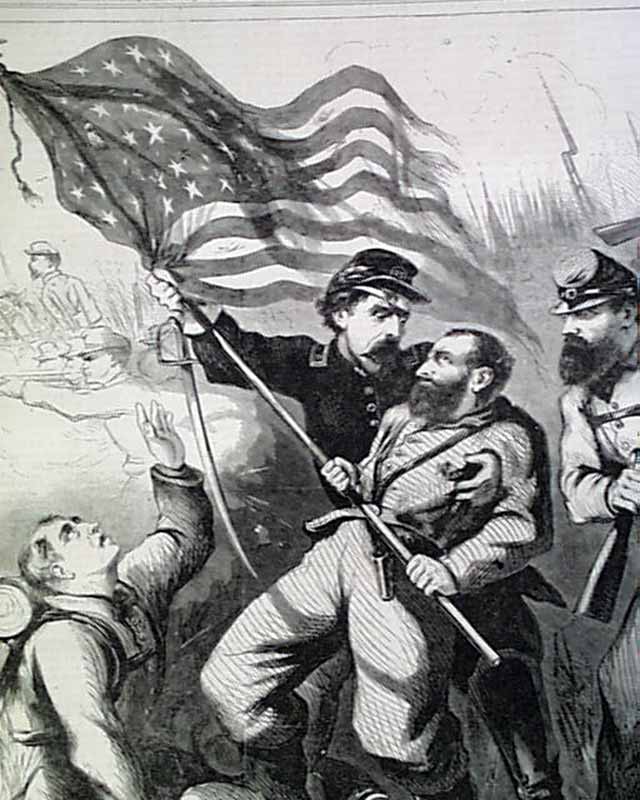 
HARPER'S WEEKLY, New York, September 20, 1862  Dramatic full front page illustration: "A Gallant Color-Bearer" is by Thomas Nast. Prints inside include: "General Buell's Campaign" showing many views; "Preparations for Defense at Cincinnati--Citizens in the Trenches" showing "Troops Crossing to Covington" and 2 other images.
Historic & dramatic doublepage centerfold: "General Sigel's Corps at the Second Battle of Bull Run--Fought August 29, 1862". Also a full page: "War Map of Kentucky and Tennessee, Showing the Present Theatre of Operations in the West". Other prints include: "The Late General Isaac I. Stevens" and "The Late General Phil Kearney" and "The Late Colonel Fletcher Webster" and a halfpg: "The Army of the Potomac Passing the Hygeia Hotel at Old Point Comfort, Virginia".
The back page has 2 political cartoons: "The Situation in Ohio" & "The Three Months Volunteer at Home". Complete in 16 pages.