Home > Back to Search Results > Heroes of Shiloh... The Merrimac... Homer prints...
Click image to enlarge 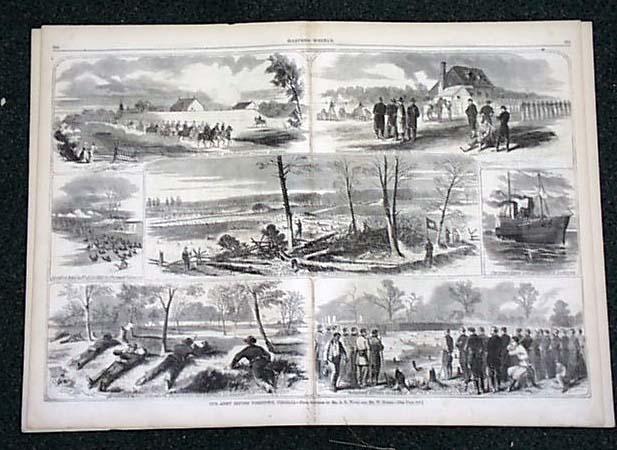 
HARPER'S WEEKLY, New York, May 3, 1862 The full front page is taken up with 11 photos of: "The Heroes Of The Battle of Pittsburg Landing." showing U.S. Grant and Buell among others. Inside has a full page with 3 prints: "General Buell's Army Crossing Duck River, at Columbia, Tennessee, to Reinforce General Grant" and a full page with 7 prints of: "The Second Trip of the 'Merrimac'--Scenes at and Around Fortress Monroe" with related text; a full page: "Map of Yorktown and the Vicinity, Showing the Position of General McClellan's Army & the Rebels Under Jeff Davis"; half a page taken up with: "Senator Yulee's Letter"; a full page with 4 prints of: "The Bombardment & Capture of Fort Pulaski, April 11, 1862"; a halfpg. with 2 prints of: "View of Steamers Sunk by the Rebels Between Island Number Ten and New Madrid" a half pg; "Island Number Ten After the Surrender".
The doublepage centerfold has 7 prints of: "Our Army Before Yorktown, Virginia", some of which were drawn by famed artist Winslow Homer.
The back page has 3 war-themed cartoons. Complete in 16 pages.