Home > Back to Search Results > Destroying Wasps and Hornets...
Click image to enlarge 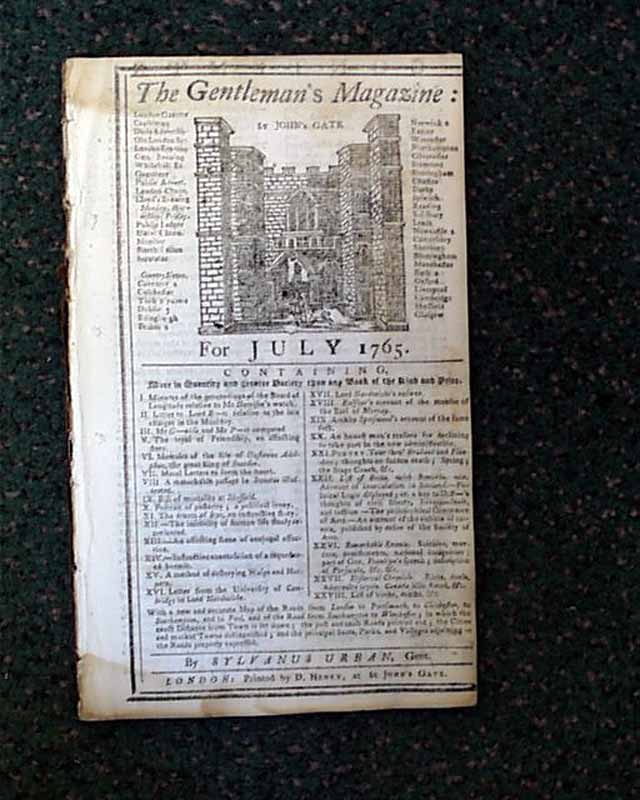 Item # 121381 THE GENTLEMAN'S MAGAZINE, London, July, 1765 The front page of this issue has a nice masthead of St. John's Gate and contains news & stories from around the world during this very early time in history.  This issue contains content, ads, and headlines which are not pictured, including: "Letter from Cambridge Univ. to Ld Hardwick and Anfwer", "Method to destroy Wasps and Hornets", "The Story The Tryal of Friendship", and much more. Very interesting reading from the day it was first reported. This issue is in nice condition, measures 5 by 8 inches, and contains about 54 pages. A nice period item form the 18th century.

A long-popular English periodical that gave the name "magazine" to its genre. It was the first general periodical in England, founded by Edward Cave in 1731. It originated as a storehouse, or magazine, of essays and articles culled from other publications, often from books and pamphlets. Its motto-"E pluribus unum"-took note of the numerous sources scoured to assemble one monthly" Source: Encyclopedia Britannica.