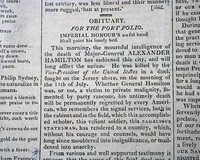 
THE PORT FOLIO, Philadelphia, July 14, 1804  Inside has: "Obituary" which begins: "This morning the mournful intelligence of the death of Major-General ALEXANDER HAMILTON has saddened this city & will long afflict the nation. He was killed by the Vice President of the United States in a duel, fought on the Jersey shore on the morning of the 11th of July..." with much m... See More 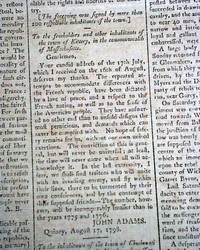 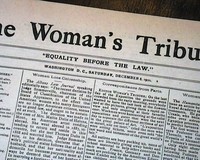 
THOMAS'S MASSACHUSETTS SPY OR WORCESTER GAZETTE, Oct. 16, 1799  The back page has a nice "War Department" notice mention that: "All officers...who are...absent from their commands are required...to report themselves by letter to Major General ALEXANDER HAMILTON..." with a bit more. This is the Alexander Hamilton who served again in the military during the Quasi War.
F... See More 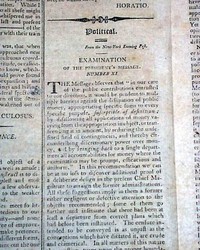 
THE BALANCE & COLUMBIAN REPOSITORY, Hudson, New York, March 16 and 23, 1802  Pages 2 & 3 of each issue contain the: "Examination Of The President's Message, Number XI". It begins in the March 16 issue & concludes in the issue of the 23rd.
Although not signed this work was written by Alexander Hamilton. A website notes: "Hamilton’s “Examination ... See More 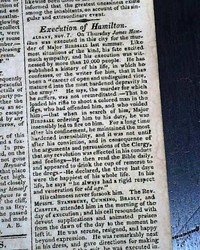 
COLUMBIAN CENTINEL, Boston, Nov. 14, 1818  The front page has: "Execution of Hamilton" from Albany, which notes at the beginning: "On Thursday James Hamilton was executed in this city for the murder of Major Birdsall last summer...his fate excited much sympathy, and his execution was witnessed by more than 1000 people...".
Shortly before his execution Hamilton wrote his f... See More 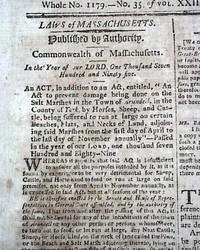 
COLUMBIAN CENTINEL, Boston, July 8, 1795  A very significant issue as the single sheet "Extraordinary" which is attached contains the full text of the Jay Treaty.
Jay's Treaty between the United States and Great Britain that averted war, resolved issues remaining since the treaty which ended the Revolutionary War, and facilitated ten years of peaceful trade between the United S... See More 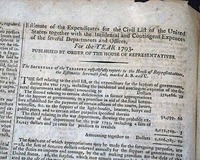 
DUNLAP'S AMERICAN DAILY ADVERTISER, Philadelphia, Nov. 27, 1792  The front page features 24 illustrated ship advertisements (see). Inside has 4 columns taken up with a lengthy chart of the: "Estimate of the Expenditures for the Civil List of the United States..." for the year 1793 which notes the salaries for a vast number of employees beginning with the President, Vice Presiden... See More 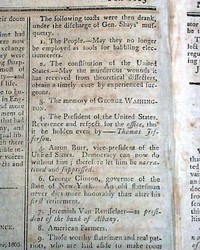 Why we should not purchase the Louisiana Territory...

Pg. 2 has a list of 4th of July toasts, including to: "Alexander Hamilton, and the Constitution".
Page 3 has an interesting letter criticizing the purchase of the Louisiana Territory, noting: "When the news was first announced that Louisiana had been ceded to the Un... See More 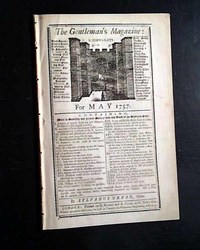 The first 2 1/2 pages have reports from the French & Indian War in America, including five letters written by General Braddock datelined Williamsburgh and Alexandria. In the introductory comments on the first page is mention that: "...concerning the territorie... See More

Page 3 has a report concerning the construction of a light house at Shell Castle and at Cape Hatteras (see). Also reports from New York, Pittsfield, Worcester, Boston and Lexington.
The back page has a nice "War Department" notice mention that: "All officers...who are... See More 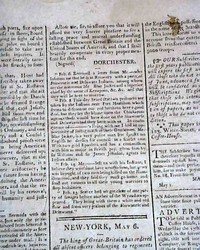 Page 3 has 3 reports concerning affairs with Indians near Fort Hamilton (see). Various other news of the day and a wealth of ads.
Four pages, never bound nor trimmed, a bit of light damp staining, good condition.... See More 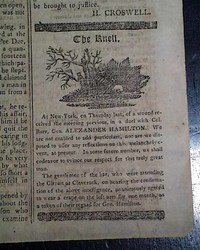 Early report on the death of Alexander Hamilton...

Note: Whereas this noteworthy issue has already sold, due to the unique nature of the coverage, we are making a set of 600dpi-images (printable/publishable quality) available for a minimal price. Once paid, we will e-mail you this set of images which includes: the entire front page, the report on the death o... See More 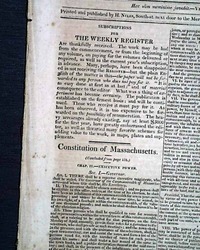 
THE WEEKLY REGISTER, Baltimore, Nov. 7, 1812  There are at least two notable reports in this issue, the first being the annual state-of-the-union address by the President, signed by him in type: James Madison. This was the first war-time annual message and much of this 2+ page "Message" deals with the War of 1812 (see for portions).
Nearly five pages are taken up with: "Events... See More 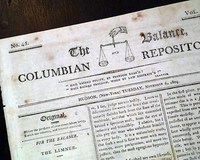 Burr cleansed of the blood of Hamilton... Union College...


THE BALANCE & COLUMBIAN REPOSITORY, Hudson, New York, Nov. 6, 1804  Page 3 has an item: "The Vice-President" which includes: "Mr. Burr...begins to rise again in the political hemisphere...This is precisely what we expected. The blood of Hamilton has cleansed  Burr in the eyes of republicans, of all his political crimes..." and more (see).
Over a full page is take... See More 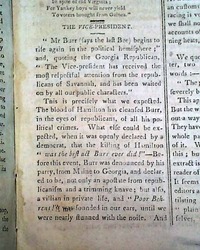 Burr cleansed of the blood of Hamilton... Union College...


THE BALANCE & COLUMBIAN REPOSITORY, Hudson, New York, Nov. 6, 1804  Page 3 has an item: "The Vice-President" which includes: "Mr. Burr...begins to rise again in the political hemisphere...This is precisely what we expected. The blood of Hamilton has cleansed Burr in the eyes of republicans, of all his political crimes..." and more (see).
Over a full page is taken up w... See More 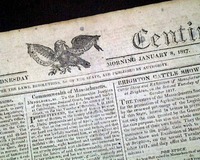 Among the page 2 "Deaths" is one that reads: "At his residence at Hamilton College, in New-York State, after a...severe attack of the fever, The Reverend Doctor Backus, President of that Institution....[he] was universally considered...one of the most em... See More 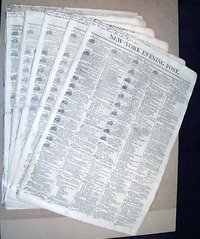 Item #180082
NEW-YORK EVENING POST, 1806 A lot of 6 issues with the front page having at least 4 ship ads, each with a small woodcut of a ship. All issues are in overall good condition, with only minor foxing and rubbing, but may be close-trimmed at the margin. The New-York Evening Post was founded by Alexander Hamilton. The issues within this set are from the first few years after his death.  The newspap... See More