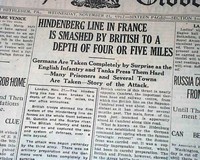 The top of the front page has a two column headline: "HINDENBERG LINE IN FRANCE IS SMASHED BY BRITISH TO A DEPTH OF FOUR OR FIVE MILES" with subhead. (see) First report coverage on what is considered the first successful tank battle which occurred du... See More 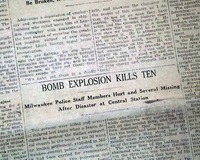