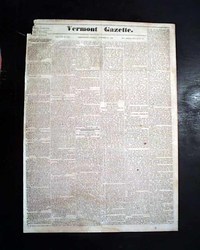 
NATIONAL INTELLIGENCER, Washington, D.C., Jan. 6, 1816  The back page has a lengthy article on the: "Mississippi Territory" which concerns the: "...praying for admission into the Union as an independent state." Before the following year would end Mississippi would become the 20th state of the Union.
Also on the bkpg. is: "The Algernine Treaty" signed in type by ... See More 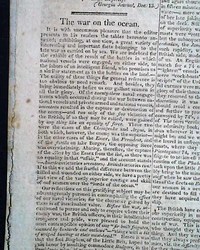 
THE WEEKLY REGISTER, Baltimore, Jan. 6, 1816  Perhaps the best content in this issue is the very nice full page chart headed: "NAVAL BATTLES" which lists the various naval actions of the War of 1812, with columns headed "Action Between" "When" "Where fought" "Commander's Name" and several more (see). This chart includes a great wealth of c... See More 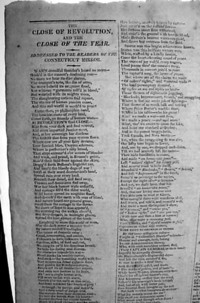 
CONNECTICUT MIRROR, Hartford, Jan. 8, 1816 Taking 2 columns on pg. 2 is: "The Close Of Revolution And The Close Of The Year. Addressed To The Readers Of The Connecticut Mirror" being the carrier's address. Good. 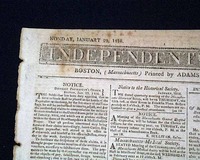 A page 2 report states that John Holmes of Maine and General Peter Porter of New York were appointed commissioners by the President and Congress ...under the late treaty with Great-Britain, to settle the boundary between the United States and the British Provinces. Other news of th
... See More