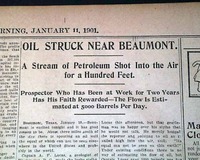 Although discoveries were made in various locations long before this date, this discovery--to be known as Spindletop--marked the emergence of the oil industry at a time when the automobile and other industries were experiencing rapid growth... See More 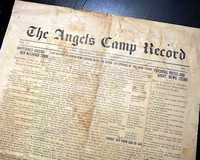 
THE ANGELS CAMP RECORD, Calaveras County, California, Sept. 7, 1907  Certainly the first issue we have sold from this Northern California town. A typical newspaper of the day, 8 pages never bound nor trimmed so it folds out to one large sheet. Various archival mends mostly at margins. Minor foxing, and minor wear at the folds & margins. 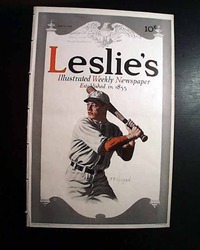 
LESLIE"S ILLUSTRATED, New York, April 2, 1914  See the photo for the terrific, color cover on this issue, featuring a baseball player at bat. A terrific item for display. Such color covers rarely survived, hence quite scarce.
Very nice condition, although with a rather discrete inked stamp near the top just under the wing of the eagle--almost unnoticeable. 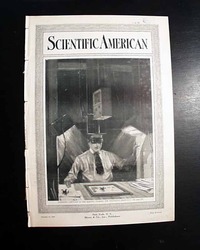 
SCIENTIFIC AMERICAN, New York, Oct. 14, 1916 The entire front page is taken up with an illustration captioned: "Animated Cartoons In the Making: Filming the Successive Drawings." showing a man doing just that. An inside page is entirely devoted to: "Animated Cartoons in the Making--How 16,000 Drawings are Prepared & Photographed in Producing 1000 Feet of Motion Picture Film&quot... See More 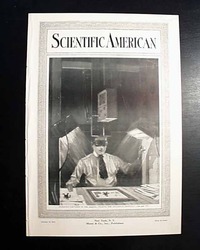 
SCIENTIFIC AMERICAN, New York, Oct. 14, 1916  The entire front page is taken up with an illustration captioned: "Animated Cartoons In the Making: Filming the Successive Drawings." showing a man doing just that. An inside page is entirely devoted to: "Animated Cartoons in the Making--How 16,000 Drawings are Prepared & Photographed in Producing 1000 Feet of Motion Picture Fil... See More 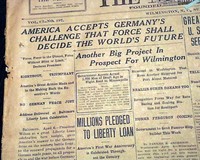 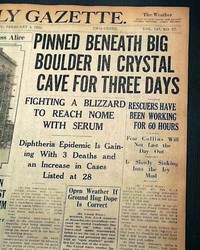 
TAUNTON DAILY GAZETTE, Massachusetts  A lot of four issues dealing with the Floyd Collins cave incident. Dates are Feb. 2, 16, 17, and 18, 1925.
Collins became trapped in a narrow crawlway, 55 feet below ground. The rescue operation to save Collins became a national newspaper sensation and one of the first major news stories to be reported using the new technology of broadcast radio. The res... See More 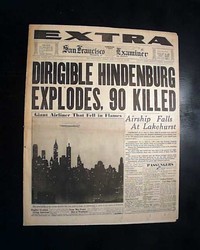 Terrific issue on the Hindenburg tragedy...


SAN FRANCISCO EXAMINER--EXTRA, May 7, 1937  One of the very best, dramatic banner headlines we have offered on this historic catastrophe: "DIRIGIBLE HINDENBURG EXPLODES, 90 KILLED". A large front page photo shows the Hindenburg over the New York skyline, headed: "Giant Airliner That Fell in Flames", with the subhead noting: Airship Falls At Lakehurst".
This is one of... See More 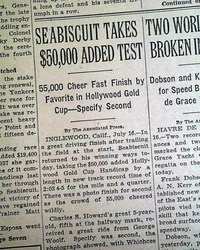 the front page of the sport's section (inside) has a one column heading: "SEABISCUIT TAKES $50,000 ADDED TEST" with subhead. (see) First report coverage on famous racehorse, Seabiscuit, winning the Gold Cup at Santa Anita Stakes in ... See More 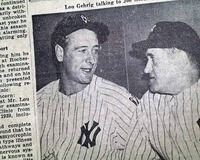 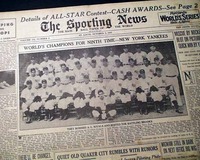 Yankees beat the Dodgers to win the World Series...


THE SPORTING NEWS, St. Louis, Oct. 9, 1941  The front page features a quite large photo headed: "WORLD'S CHAMPIONS FOR NINTH TIME---NEW YORK YANKEES". The photo shows the entire team with the names of each in the caption, including Joe DiMaggio, Bill Dickey, & Phil Rizzuto among others. Front page coverage as well, but much more on page 3, with 7 photos.
Fourteen pages, lig... See More 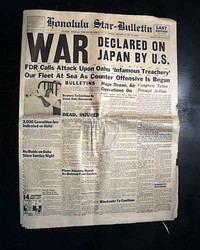 
HONOLULU STAR-BULLETIN,  Honolulu, Territory of Hawaii, Dec. 8, 1941 "Last Edition"  The very famous Dec. 7 issue of this paper has been reprinted so many times that genuine issues are difficult to find, although they do exist.
Equally as rare--if not more so--is the last edition of the December 8 issue which has a very similar headline, with the huge & bold: "WAR&quo... See More 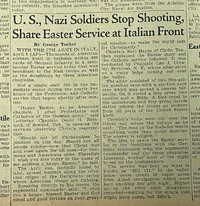 Happy Easter - Germans and Americans in the trenches of WWII....

* Easter cease-fire
* Soldiers from both sides celebrate - together but apart

The front page has: "U.S., Nazi Soldiers Stop Shooting, Share Easter Service at Italian Front", followed by details of the event. Nice to have on the front page. Other articles include: "Draft Proposed Constitution For United States of Europe",... See More 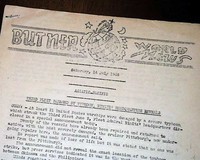 Closing events of World War II in a ship's newspaper...


BUTNER WORLD NEWS, July 14, 1945  This is a mimeographed newspaper produced by the staff on board the USS General H.W. Butner, the American troop carrier transporting troops from Europe to the Pacific.
It is a four page newspaper, typewriter set, with front page headlines including: "Third Fleet Damaged by Typhoon, Nimitz: Headquarters Reveals" "Superfortresses Again Fire Japa... See More 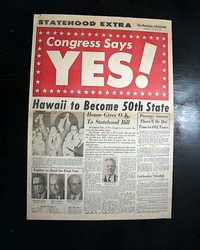 
THE HONOLULU ADVERTISER, Hawaii, March 12, 1959  See the photo for this very dramatic & displayable front page. Nearly half of the front page is taken up with: "Congress Says YES ! " in huge letters dropped out of a large red box, above which is printed: "Statehood Extra". The banner headline beneath the box is: "Hawaii To Become 50th State" with other relate... See More 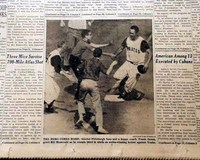 
NEW YORK TIMES, Oct. 14, 1960  The bottom of the front page has a very famous photo of Bill Mazeroski rounding third in his series-winning home run against the Yankees to win the 1960 baseball World Series. The top of the front page has column heads: "Pirates Win, 10-9, On Homer In Ninth And Take Series" "Mazeroski Hit Beats Yanks, Lifts Pittsburgh to First World Title In 35 Ye... See More 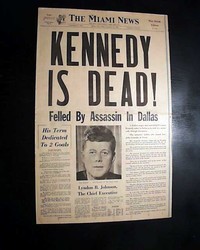 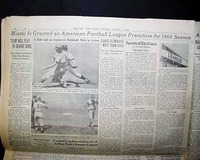 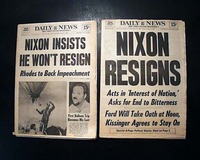 
DAILY NEWS, New York, August 7 & 9, 1974  Here is a pair of issues which belong together. Printed just two days apart, the August 7 issue headline announces: "NIXON INSISTS HE WON'T RESIGN" while just two days later the same newspaper announces: "NIXON RESIGNS".
Both issues are complete, tabloid-size, and in nice condition. Would be great to have both framed, side... See More