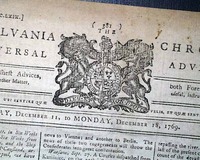 Offered is an original, historic, & collectible old newspaper: THE PENNSYLVANIA CHRONICLE & UNIVERSAL ADVERTISER, Philadelphia, Dec. 18, 1769 * Benjamin Franklin's son - William * Non-importation agreement An item from Providence includes: "At a meeting of the merchants & traders of this town...convened in consequence of a letter form the committee of merchants at Boston recommending our extending the non-importation agreement until all the American revenue acts are repealed..." with more. Half of the back page is taken up with: "A Proclamation" which relates to fishing & related issues in the Delaware River, signed in type by the governor of New Jersey: William Franklin (Ben's son). Eight pages, 9 1/2 by 11 1/2 inches, some browning near the margins, handsome coat-of-arms eng... See More 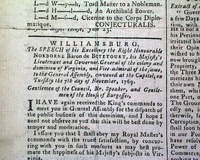 Offered is an original, historic, & collectible old newspaper: THE PENNSYLVANIA CHRONICLE & UNIVERSAL ADVERTISER, Philadelphia, Nov. 27, 1769 * Pre Revolutionary War tensions * Colonial - Anti-British title Inside has an address by the governor of Virginia to the House of Burgesses concerning a boundary line between the colony and Cherokee Indian land. This is followed by another address noting: "...that his Majesty's present administration have at no time entertained a design to propose to parliament to lay any further taxes upon America for the purpose of raising a revenue, & that it is their intention to propose in the next session of Parliament to take off the duties upon glass, paper and colours...". (see) Other news of the day & a wealth of ads. Eight pages, 9 1/2 by 11 3/... See More 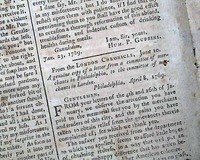 Shown is an original & historic old newspaper, offered to enhance your collectible interest: PENNSYLVANIA CHRONICLE, & UNIVERSAL ADVERTISER, Philadelphia, Sept. 4, 1769 * Rare Colonial title A notable title from the colonial period, that has an ornate royal coat-of-arms engraving in the masthead. Content includes a lengthy ftpg. letter addressed "To the Printer" that is signed in type: Atticus. Pages 2 & 3 has news and other content from "London", while page 4 has a lengthy letter from a "committee of merchants in Philadelphia, to the committee of merchants in London" discussing the differences between the two groups of merchants, particularly the imposition of duties on items such as "...glass, paper, &c...". The letter concludes on pg. 5 (see). There is also news from "Charles... See More 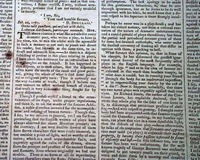 Shown is an original & historic old newspaper, offered to enhance your collectible interest: PENNSYLVANIA CHRONICLE, AND UNIVERSAL ADVERTISER, March 2, 1767 * Rare Colonial title * American taxation Much of the front page is taken up with a very lengthy letter concerning the theater in America and elsewhere. Page 3 has a letter from London with criticism towards George Grenville with one bit noting: "...they bribed them to be quiet; that the evil ought to be probed to the very bottom & the real causes of our present situation out to be explored...To this G--v--le replied that he having endeavoured to make our Colonies in America contribute to the support of government, they had bribed them to be quiet by a total repeal of that law, and that it was very strange they would not do tha... See More