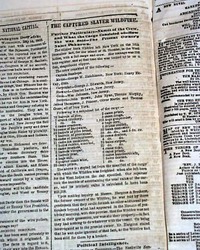 Offered is an original, historic, & collectible old newspaper: NEW YORK HERALD, May 15, 1860 * Famous slaver "Wildfire" captured * Abraham Lincoln close to nomination Several nice reports including: "The Captured Slaver Wildfire" "Further Particulars--Names of the Crew and What the Cargo Consisted of...". This was a noted slave ship made more famous by the print of it in the June 2, 1860 issue of Harper's Weekly. Also reports from the Republican National Convention: "The Presidency" "The Chicago Convention" "What is to be the Platform of the Party?" and much more, including a chart of: "The Presidential Aspirants" which includes a then-nearly unknown: "Illinois.....Abraham Lincoln". Also a report from the Pony Express, and "[Black] Free Suffrage Meeting". Twelve pages, a bit ... See More 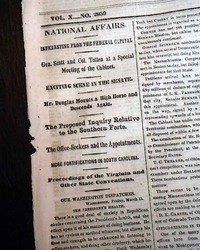 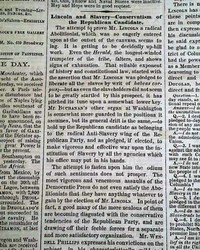 Offered is an original, historic, & collectible old newspaper: THE NEW YORK TIMES, July 31, 1860 * Mormons & Salt Lake City * Early baseball & Pony Express Over an entire column on the front page is taken up with: "Affairs In Utah--Celebration of the National Anniversary at Salt Lake City--The Grain Crops--How the Presidential Nominations are Received". Also on the front page: "Base Ball--Atlantic Club vs. Mutual Club" with much detail and the box score. Difficult to find pre-Civil War baseball game reports. Page 5 has: "Arrival Of The Pony Express--News From the Pacific Coast" with a St. Joseph dateline & the text beginning: "The Pony Express, through in ten days, has just reached here with a general summary of news from California..." which follows. Eight pages, loss to ... See More 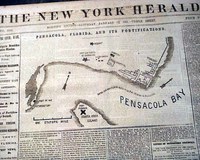 Offered is an original, historic, & collectible old newspaper: NEW YORK HERALD, Jan. 12, 1861 * Pensacola - Fort Pickens map * Florida & Alabama secession (1st reports) * Pre Civil War tensions brewing Certainly the dominant feature is the large front page map headed: "Pensacola, Florida, And Its Fortifications." The first column headlines relate to it and the advent of war, and include: "THE IMPENDING CIVIL WAR" "Important Despatches to Major Anderson & Gov. Pickens" "Resignation of Mr. Thomas as Secretary of the Treasury" "Number & Cost of Fortifications Already Seized" "State of The Union" "Names of Federal Officers Resigned" "Secession in Florida" and more. Inside has: "Secession of Florida and Alabama from the Union" "Capture of All the Forts & Arsenals of Louisiana by St... See More 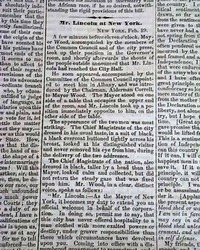 Offered is an original, historic, & collectible old newspaper: THE CRISIS, Columbus, Ohio, Feb. 28, 1861 * President elect Abraham Lincoln * Journey to the White House * Pro Confederate title Content includes: "Mr. Lincoln at New York" "Mr. Lincoln at Philadelphia" "More Seceding States!' "Mr. Greeley on Mr. Lincoln's Hasty Departure from Harrisburgh" "The President Elect's Flight from Harrisburgh" "Troubles In Kansas" "Shocking Murders" "A Thrilling Narrative of Texas Border Life..." "Arrival of the Pony Express" and much more. Eight pages, never-trimmed margins, nice condition. Described as "The Hottest Rebel Sheet to be found in the North or the South", this newspaper opposed the war and attracted the hatred of the Republicans and the Lincoln administration. It insisted th... See More 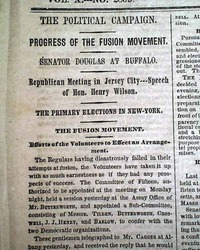 Shown is an original & historic old newspaper, offered to enhance your collectible interest: NEW YORK TIMES, Sept. 21, 1860 * William Walker (filibuster) shot * Nicaragua expedition - Honduras The ftpg. has reporting on: "The Political Campaign" which includes mention of Lincoln. Also on the ftpg: "News From California" "Arrival of the Overland Express" which begins with a St. Joseph dateline: "The Pony Express with California dates to Sept. 8 arrived here last night...". Also: "Gen. Walker Shot" being a report of the fascinating William Walker, who attempted to create English speaking colonies in Latin America under his control. He was shot by Honduras authorities (see hyperlink for more). Eight pages, some archival mends near the right margin. 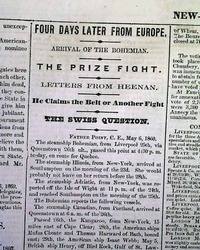 Shown is an original & historic old newspaper, offered to enhance your collectible interest: NEW YORK TRIBUNE, May 7, 1860 * John C. Heenan vs. Tom Sayers * First World boxing championship match Page 5 has a one column head: "Four Days Later From Europe" "The Prize Fight" "Letters From Heenan" "He Claims the Belt or Another Fight". This was the famous match with Sayers, considered as boxing's first world championship. "...Not having been able to obtain from you as a referee the final decision upon the fight of Tuesday last, I desire to demand through you a new meeting within the present week. I make this demand from you having been informed that it has been suggested on your part that I should give Sayers sufficient time to recover from certain injuries received by him..." Page... See More 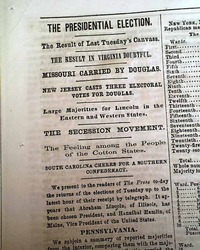 Shown is an original & historic old newspaper, offered to enhance your collectible interest: THE WEEKLY PRESS, Philadelphia, Nov. 10, 1860 * Abraham Lincoln's election win (1st) Page 3 has reports and charts on the Presidential election, the first column heads not noting anything definitive: "THE PRESIDENTIAL ELECTION" "The Result of Last Tuesday's Canvass" "The Result In Virginia Doubtful" "Missouri Carried By Douglas" "Lare Majorities for Lincoln in the Eastern & Western States" "The Secession Movement" and more (see). But the editorial on the same page is more definitive: "The Result of the Presidential Struggle" which includes: "...That Abraham Lincoln, of Illinois, and Hannibal Hamlin, of Maine, have been elected to the two highest offices in the gift of the American people, th... See More