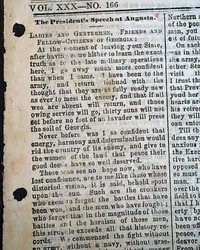 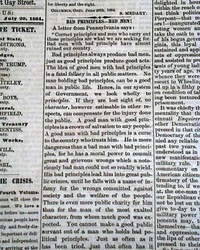 Shown is an original & historic old newspaper, offered to enhance your collectible interest: THE CRISIS, Columbus, Ohio, July 20, 1864 * Rare pro Confederate title * Abraham Lincoln proclamation Among the reports are: "Gen. Hunter's Campaign--His Imbecility & Vandalism" "Bad Principles--Bad Men!" "The President's Fast Day Proclamation" signed in type: Abraham Lincoln; "War News of the Week" "General Forrest--Southern News" "From the South--Details of Hunter's Retreat" & much more. Eight pages, never bound nor trimmed so it folds out to one large sheet, nice condition. Described as "The Hottest Rebel Sheet to be found in the North or the South", this newspaper opposed the war and attracted the hatred of the Republicans and the Lincoln administration. It insisted that slavery co... See More 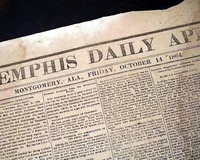 Shown is an original & historic old newspaper, offered to enhance your collectible interest: THE MEMPHIS DAILY APPEAL, Montgomery, Alabama, October 14, 1864 * Very Rare Confederate title from the "traveling" newspaper * Memphis newspaper printed in Montgomery, Alabama * A wealth of Civil War related reporting See the bottom of this listing for the fascinating history of this newspaper. Among the front page items are: ""Forrest's Operations" taking half a column; "The Saltville Fight" "Federal Accounts from the Richmond Front" "Grant's Losses" "Yankee Reports from Virginia" "Peace" "From the Front" "General Orders No. 10" and other war-related items. The back page includes: "General Hood's Position and Purposes" "Something Reliable" "A Prudent Forecast" "The Third Alabama Regime... See More 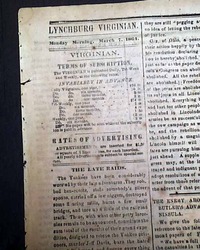 Shown is an original & historic old newspaper, offered to enhance your collectible interest: LYNCHBURG VIRGINIAN, March 7, 1864 * Rare Confederate title A quite uncommon Confederate title, only the 2nd we have offered in many years. Among the reports: "The Late Raids" "The Enemy Around Richmond--Butler's Advance Up the Peninsula" "Sherman's Expedition" "The Yankee Congress" "More of the Raiders Captured" "Object of the Raiders to Destroy Richmond, Murder Jeff Davis" " "General Forrest's Victory" and more. Complete as a single sheet newspaper with just a one column masthead, rather common from the Confederacy late in the war as most of the paper mills were in the North and their was need to maximize use of newsprint. A minor ink smear, generally nice condition. 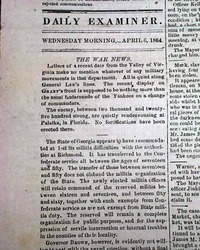 Shown is an original & historic old newspaper, offered to enhance your collectible interest: DAILY RICHMOND EXAMINER, Virginia, April 6, 1864 * Rare rebel title There is much war-related content on the front page with heads & reports including: "The War News" "...All is quiet along General Lee's lines......" and smaller heads including: "Deserters From The Yankee Navy" "Alleged Defaulter" "Colonel Henry T. Gantt..." "Death of a Promising Young Marylander" with various other tidbits throughout the page. Plus there is more on the Civil War on the back page of this single sheet newspaper, including: "The Spring Campaign--Its Importance & Prospects--General Grant on the Road to Richmond--What is Before Us" and "Negro Equality in the North" "The Question In Congress--Yankee Senators Decla... See More