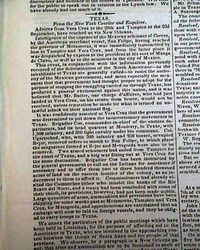 Offered is an original, historic, & collectible old newspaper: NILES' WEEKLY REGISTER, Baltimore, Nov. 7, 1835 * Texas War for Independence begins * Battle of Gonzales TX Inside has 2 1/2 pages of news under the heading: "Texas" concerning events from the beginning of their war for independence. The reports seem to be a result of the Battle of Gonzales (first battle of the Texas war for independence) but there is no direct reference to it. Included are: "....It was confidently asserted at Vera Cruz that the government was determined to put down the insurrectionary movements in Texas..." and "Whereas, the rights & liberties of our fellow countrymen of the neighboring province of Texas are endangered by the violent & despotic course of general Santa Anna..." with more. Included also ... See More 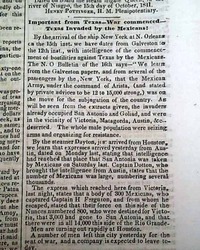 Shown is an original & historic old newspaper, offered to enhance your collectible interest: THE WEEKLY HERALD, New York, March 26, 1842 * General Mariano Arista Page 5 has a noteworthy article headed: "Important From Texas--War Commenced--Texas Invaded by the Mexicans!" with various details. See this hyperlink for more on the Mexican invasion of 1842. Eight pages, good condition.