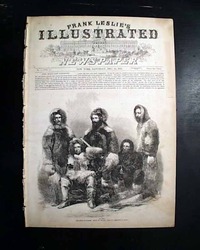 Shown is an original & historic old newspaper, offered to enhance your collectible interest: FRANK LESLIE'S ILLUSTRATED, New York, Dec. 15, 1855 * Volume 1 - Number 1 issue This is the very first issue, volume one, number one, of what would become the first truly successful illustrated newspaper in America, predating even the famous Harper's Weekly by more than a year. Following on the heels of the Gleason's/Ballou's publication which lasted about 10 years, Leslie's would last for 65 years. The ftpg. features illustrations of: "The Arctic Explorers". Other prints within include: "Map of the Three Proposed Pacific Railway Routes" & a nice fullpg: "Panorama of the Great Southern Pacific Railway" which features many iconic images of the West. Plus the bkpg. includes a life-size prin... See More 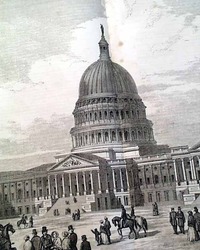 Shown is an original & historic old newspaper, offered to enhance your collectible interest: BALLOU'S PICTORIAL, Boston, April 19, 1856 * United States Capitol Building Formatted much like Harper's Weekly, but preceding it by several years. The ftpg. has an allegorical illus. of the: "State of Illinois" with an article on the state. The prime feature of the issue is a great double page centerfold of the: "National Capitol" in Washington, D.C., showing it as it will look in the future with the extensions and new dome. A related article as well. Another full pg. has 3 prints of modes of transportation in India, and another pg. has a print of: "A Southern Planter's Home In Alabama". Sixteen pages, bit of minor foxing near margins, good condition. 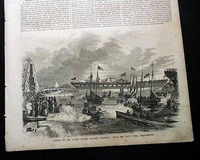 Shown is an original & historic old newspaper, offered to enhance your collectible interest: BALLOU'S PICTORIAL, Boston, July 14, 1855 * USS Merrimack launching * CSS Virginia ironclad warship fame The front page has a nice print captioned: "Launch of the U.S. Steamer Merrimac..." with a related article. This was the ship that would letter be refitted to become the ironclad ship in the Confederate navy and would engage the Monitor in the very first battle of ironclads, opening a new era in naval warfare. Other prints within include: "Departure from Suez Once the Resident of Napoleon Bonaparte" "Island of Ivica" "Island of Majorca" "Lake Dunmore House at Salisbury, Vermont" "Bayonet Drill of the...Cadets...on Boston Common" plus more. Sixteen pages, nice condition.