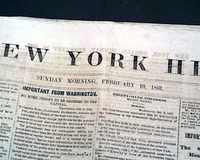 Offered is an original, historic, & collectible old newspaper: NEW YORK HERALD, Feb. 10, 1861 * Jefferson Davis elected Confederate president * Constitutional Convention of the Confederacy * Pre Civil War tensions brewing A wealth of significant content on the creation of the Confederacy, with front page column heads including: "Important From the South" "The Southern Congress at Montgomery, Alabama" "Adoption of A Constitution" "The Executive Officers of the New Republic" "Jefferson Davis or Mississippi, President" "Alexander H. Stephens, of Georgia, Vice President" and more. The front page subheads include: "The Constitution of the Southern Confederacy" which gives some highlights from their constitutional convention, including the text of the Preamble, and also noting differ... See More 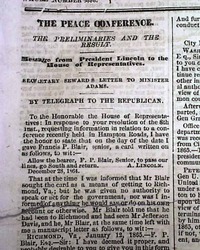 Shown is an original & historic old newspaper, offered to enhance your collectible interest: SPRINGFIELD REPUBLICAN, Massachusetts, Feb. 11, 1865 * Peace conference * Confederate mission * Abraham Lincoln Most of the front page is taken up with: "The Peace Conference" 'The Preliminaries & the Result" 'Message from President Lincoln to the House of Representatives". This is quite lengthy & detailed and in addition to eight front page correspondences each signed in type: A. Lincoln, there are other documents signed in type by Jefferson Davis, Alexander Stephens, William Seward, U.S. Grant, & more. Much on the Civil War inside. Eight pages, archival mends to each leaf, very nice condition.