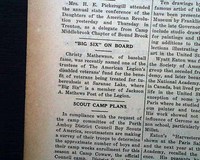 Offered is an original, historic, & collectible old newspaper: THE MOSQUITO, Perth Amboy, New Jersey, March 21, 1925 A curious little newspaper which appears to be the combination of the Middlesex Plain Dealer and the Perth Amboy Press. Filled mostly with local news and tidbits, many quite folksy and humorous, plus many ads as well. The ftpg. has a bit noting: "Christy Mathewson, of baseball fame, was recently named one of the trustees of the American Legion's disabled veterans' fund...". A volume one issue of a very short-lived title as Gregory notes the last recorded date as March 15, 1926. Issues held by only two institutions. Eight pages, measures 9 by 12 inches, good condition. 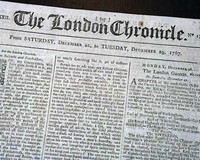 Offered is an original, historic, & collectible old newspaper: THE LONDON CHRONICLE, England, December 29, 1767 This is a great example of this famous and very successful newspaper from during the troubling years just before the American Revolution, when the relationship between England and the American colonies was growing more and more strained. Virtually all of the content is European in nature, but this issue presents a nice example of the political & cultural temper of the time. Complete in 8 pages, many advertisements in addition to the news reports, measures 8 1/2 by 11 inches, very nice condition. 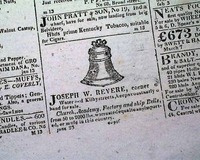 Offered is an original, historic, & collectible old newspaper: BOSTON DAILY ADVERTISER, March 14, 1822 The bottom of the front page includes a nice illustrated ad for the "Joseph W. Revere..." bell foundry. Joseph was one of the 16 children of Paul Revere who continued the business from his father. Nice to have this Revere item on the front page of a Boston newspaper. Four pages, never bound nor trimmed, very nice condition. 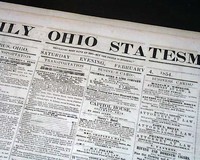 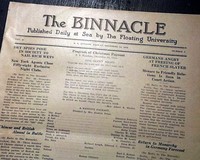 Offered is an original, historic, & collectible old newspaper: THE BINNACLE, S.S. Ryndam, Dec. 24, 1926 * Rare title Subtitled: "Published Daily at Sea by The Floating University." An interesting little "in-house" newspaper published on board the ship of this early floating university which traveled the world. See the hyperlink for more. Four pages, library stamp in an upper corner, 9 1/2 by 12 1/2 inches, good condition. 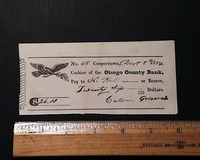 This is a genuine check written on the "Otsego County Bank" of Cooperstown, New York dated 1834. Included is the amount in the lower left corner with a signature in the lower right. There is a nice engraving of an eagle with an olive branch in its beak (see). An early financial item & great to have from this town famous as the home of the Baseball Hall of Fame. Measures 2 3/4 by 5 1/2 inches and is in nice condition. The photo shows one of several we have so your check will look almost identical but with slight variations in the handwritten notes. 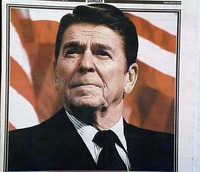 Offered is an original, historic, & collectible old newspaper: NEW YORK POST, June 6, 2004 * Ronald Reagan's death report * One of the most beloved U.S. Presidents The frontpage of the issue features a close-up photo of Ronald Reagan with the American flag behind him captioned: "Ronald Reagan (1911-2004)". Additional related coverage and photos are found within the issue, along with other news of the day. Some of the inside photos include one of Reagan holding a jersey with "The Gipper" with the number "1", and another showing him and Nancy dancing. This is complete in 128 pages, measures approximately 11 x 14 inches, and is in very nice condition. See photos for details. An historic collectible. 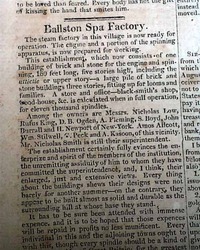 Shown is an original & historic old newspaper, offered to enhance your collectible interest: NILES' WEEKLY REGISTER, Baltimore, July 29, 1815 * Ballston Spa, New York On the back page, in the Supplement, is an article: "Ballston Spa Factory" which begins: "The steam factory in this village is now ready for operation. The engine and a portion of the spinning apparatus is now prepared for working..." with more, taking half a page. This town was the birthplace of Abner Doubleday. Complete in 20 pages with the Supplement, 6 by 9 3/4 inches, very nice condition. This newspaper began in 1811 and was a prime source for national political news of the first half of the 19th century. As noted in Wikipedia it: "...(was) one of the most widely-circulated magazines in the United States...Dev... See More 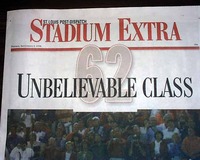 Shown is an original & historic old newspaper, offered to enhance your collectible interest: THE ST. LOUIS POST DISPATCH -- STADIUM EXTRA, September 8, 1998 * Mark McGuire sets new home run record * Pre-knowledge of steroid use This "Stadium Extra Edition" reports Mark McGwire's breaking of Roger Maris' single season home run record. This issue is unique and quite difficult to find as it was only available at the stadium. Great to have this report in a St. Louis paper. Complete in 20 pages. Nice condition, some typical ink smudging (as is typical on most issues). Very displayable and historic - even if a bit tainted due to the controversy over steroid-enhanced record-setting achievements. 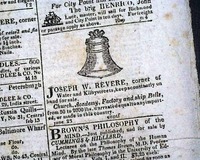 Shown is an original & historic old newspaper, offered to enhance your collectible interest: BOSTON DAILY ADVERTISER, March 16, 1822 The front page includes a nice illustrated ad for the "Joseph W. Revere..." bell foundry. Joseph was one of the 16 children of Paul Revere who continued the business from his father. Nice to have this Revere item on the front page of a Boston newspaper. Four pages, never bound nor trimmed, very nice condition.