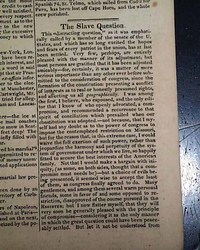 Offered is an original, historic, & collectible old newspaper: NILES' WEEKLY REGISTER, Baltimore, March 11, 1820 * Missouri Compromise * Maine and Missouri become states * Mordecai Manuel Noah... Grand Island... Jewish settlement The top of the front page has an article which announces the approval of the Missouri Compromise: "The bills for the admission of Maine and Missouri into the union have been respectively signed by the president of the United States and become laws. The latter without restriction as to slavery, but containing the provision to prevent its further extension, forever, north of 36 1/2 deg. north latitude, except within that state." (see). The front page also has a nice editorial concerning the Missouri Compromise headed: "The Slave Question", a major issue of ... See More 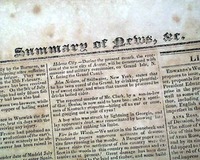 Shown is an original & historic old newspaper, offered to enhance your collectible interest: CHRISTIAN MIRROR, Portland, Maine, Sept. 16, 1825 * Mordecai Manuel Noah * Ararat, City of Refuge The top of pg. 2 has a brief yet notable item: "Hebrew City--During the present month the erection of the new city of Ararat will be commenced with masonic and military ceremonies on Grand Isle, N.Y. facing the Grant Canal." This was the effort the famed Jewish leader/politician/patriot Mordecai Manuel Noah, and effort which would never come to fruition. Page 2 also has a short item on the London Jews' Society (see). Four pages, never bound nor trimmed, various foxing, otherwise good. 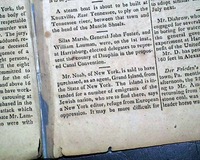 Shown is an original & historic old newspaper, offered to enhance your collectible interest: NATIONAL GAZETTE, Philadelphia, June 7, 1825 * Mordecai Manuel Noah - Jewish homeland on the Niagara River Page 2 has: "Mr. Noah...is said to have purchased...Grand Island from the state of New York. The island is intended for a number of emigrants of the Jewish nation who are to find there...refuge from European oppression..." with more (see). This was Mordecai Manuel Noah and his Zionists efforts, which never materialized. Noah was the first American-born Jew to achieve national prominence (see hyperlink). Four pages, archivally mended at the spine with various archival mends at the margins. Some margin wear. 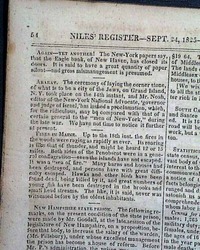 Shown is an original & historic old newspaper, offered to enhance your collectible interest: NILES' WEEKLY REGISTER, Baltimore, Sept.24, 1825 * Jewish city creation * Grand Island, New York * Niagara River One of the articles on an inside page reads in its entirety: "The ceremony of laying the corner stone, of what is to be a city of the Jews, on Grand Island, N.Y. took place on the 14th instant, and Mr. Noah, editor of the New York National Advocate, governor and judge of Israel, has issued a proclamation which for the ridiculous, may be compared with that of a certain general to the 'men of New York', during the late war. We have not time to notice it further at present." This was the project of newspaper publisher Mordecai Manuel Noah, who is credited with being the first Je... See More 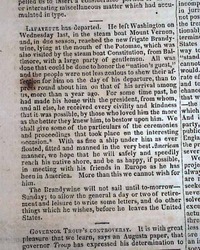 Shown is an original & historic old newspaper, offered to enhance your collectible interest: NILE'S WEEKLY REGISTER, Baltimore, Sept. 10, 1825 * Hebrew city to be established on Grand Island, New York * Jews - Jewish - Judaica One of the brief articles on the back page reads in its entirety: "An Hebrew city, to be called Ararat is to be laid off on Grand Island, N.Y., on the 15th or 18th instant, with masonic and military ceremonies. It will be located to face the mouth of the great canal." This was the project of newspaper publisher Mordecai Manuel Noah, who is credited with being the first Jew born in the United States to reach national prominence. Among the other reports in this issue are: "Naval Court Martial" which is the case of Commodore Stewart (another article on this ... See More