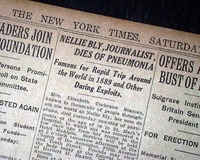 Shown is an original & historic old newspaper, offered to enhance your collectible interest: THE NEW YORK TIMES, January 28, 1922 * Nellie Bly Death * Elizabeth Jane Cochrane * New York World journalist Page 13 has one column headings: "Nellie Bly, Journalist, Dies Of Pneumonia" "Famous for Rapid Trip Around the World in 1889 and Other Daring Exploits" First report coverage on the death of famed New York World journalist, Nellie Bly. Nice to have in this famed NYC paper. Other news, sports and advertisements of the day. Complete with all 24 pages, light toning at the margins, a little irregular along the spine, otherwise nice. 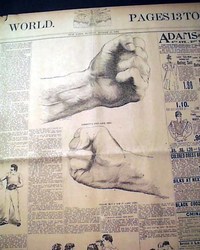 Shown is an original & historic old newspaper, offered to enhance your collectible interest: THE WORLD, New York, August 12, 1894 * Nellie Bly reporting * "Nellie Bly Spars With Corbett" * Many illustrations Nellie Bly is perhaps most famous for her trip around the world, which turned the fictional work by Jules Vernes' "Around the World in Eighty Days" into fact for the first time. But there were various other projects which consumed her journalistic career, perhaps most notably her undercover work in exposing the poor treatment of patients at the Blackwell Island asylum for the insane. This issue has one of her articles (she did a few over the years) on pages 13 & 14: "NELLIE BLY Spars With CORBETT" with subheads and several illustrations including life size illus. of each one... See More 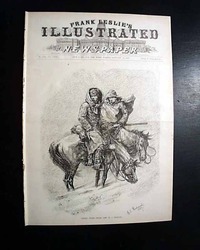 Shown is an original & historic old newspaper, offered to enhance your collectible interest: LESLIE'S ILLUSTRATED NEWSPAPER, New York, Jan. 18, 1890 * Nellie Bly - American journalist print * Around the World (during) Inside has a nice 5 1/2 by 3 1/2 inch portrait of "Nellie Bly", plus a similar-sized portrait of "Miss Elizabeth Bisland", and caption: "The Attempt To Make The Circuit Of The Globe In Seventy-Two Days--Portraits Of The Rival Tourists". Both are part of a brief article entitled: 'The Globe Trotters' " (see). Also in this issue is a full page with six scenes: "Buying A Hundred Shares Of Stock--The Process Illustrated", plus captions for each scene and a report: "A Hundred Shares Of Stock". Plus a full page: "California--Destruction of a Portion of Sierra City on ... See More