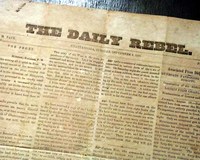 Offered is an original, historic, & collectible old newspaper: THE DAILY REBEL, Chattanooga, Tennessee, Sept. 1, 1863 * Very rare Confederate item * Chickamauga campaign An extremely rare broadside newspaper, and the first we have added to our inventory in 43 years. There is no volume or issue number, however this title began August 1, 1862. This issue is dated from the midst of the Chickamauga Campaign in Southeastern Tennessee and Northwestern Georgia. Although it began as a folio size, four page newspaper, at this point it was reduced to a smaller size, single sheet. And this issue being a broadside, it is blank on the reverse. The format makes it appear much like a "camp" newspaper as the exigencies of war in its backyard must certainly have caused a struggle for the printing... See More 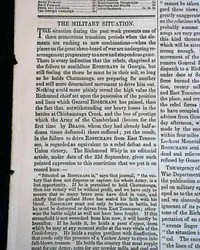 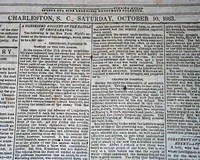 Offered is an original, historic, & collectible old newspaper: THE CHARLESTON MERCURY, South Carolina, Oct. 10, 1863 * From the origin of the Civil War * Battle of Chickamauga - Georgia The front page has over two columns taken up with: "A Connected Account Of The Battle of Chickamauga" with terrific detail. Also on the ftpg: "Treatment of Our Prisoners by the Enemy--Affairs in Baltimore" "The President's Movements" "News From Mobile" "News From Richmond" & "The Operations of Scott's Cavalry". The bkpg. includes: "The Siege--Grand Review of the Forces on James Island" and a wealth of ads & notices. Single sheet, ink stain hole at the blank spine margin, nice condition. 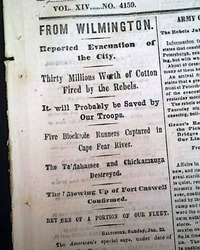 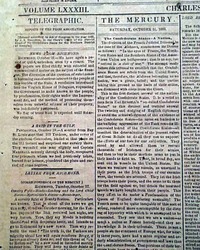 Shown is an original & historic old newspaper, offered to enhance your collectible interest: THE TRI-WEEKLY MERCURY, Charleston, South Carolina, Oct. 31, 1863 * From the origin of the Civil War * re. Battle of Chickamauga Certainly one of the less common Confederate titles in the market. Ftpg. war reports include: "Letter From Richmond" "A Raid In The Gulf" "A Yankee View of the Battle of Chickamauga" "The Confederate States--A Nation" "The Situation At Charleston" "The Rebel Rams In England--Will They Be Permitted to Sail..." "Clothing For Our Armies" "The Siege--111th Day" "and more. The bkpg. has mostly non-war reports but also has: "Jenkins' Brigade" "Clothing Four Our Troops" and more. Complete as a single sheet issue, full folio size, good condition. 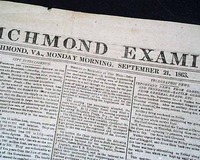 Shown is an original & historic old newspaper, offered to enhance your collectible interest: DAILY RICHMOND EXAMINER, Virginia, September 21, 1863 * Battle of Chickamauga * Chattanooga, Tennessee * Braxton Bragg victory Not only is this a nice newspaper from the Confederacy, but it is from the Confederate capital. The front page has various war-related reports with heads: "From Northern Virginia" which includes: "...most reliable that we can obtain is that General Lee holds his position this side of the Rapidan..."; "Southwestern Virginia "Sensation Rumors" which notes: "...was reported that Bragg had been defeated by Rosencrans & other equally false & mischievous rumors..."; "Telegraphic News--Important News From Georgia & Tennessee--Battle Order from General Bragg" which includ... See More