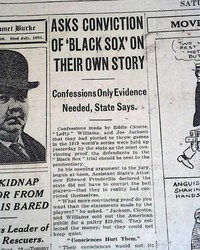 Offered is an original, historic, & collectible old newspaper: CHICAGO DAILY TRIBUNE, July 30, 1921 * Chicago White (Black) Sox scandal * Baseball World Series fix trial * Best title to be had ? rare as such As the infamous Black Sox scandal comes to its conclusion (final arguments in the trial were the day before), the ftpg. of the sports section has an interesting article headed: "Asks Conviction Of 'Black Sox' On Their Own Story" "Confessions Only Evidence Needed, State Says". The text begins: "Confessions made by Eddie Cicotte, 'Lefty' Williams, and Joe Jackson that they had plotted to throw games in the 1919 world's series were held up yesterday by the state as the most convincing proof the defendants in the 'Black Sox' trial should be sent to the penitentiary..." with ... See More 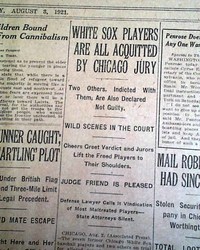 Offered is an original, historic, & collectible old newspaper: NEW YORK TIMES, Aug. 3, 1921 * Chicago "Black Sox" White Sox * 1919 World Series of baseball scandal * Not guilty verdict - "Shoeless" Joe Jackson The top of a front page column has the historic verdict on the White Sox players who were accused of conspiring to throw the 1919 World Series. The column heads include: "WHITE SOX PLAYERS ARE ALL ACQUITTED BY CHICAGO JURY" "Two Others, Indicted With Them, Are Also Declared Not Guilty" "Wild Scenes in the Court" "Cheers Greet Verdict and Jurors Lift the Freed Players to Their Shoulders" "Judge Friend Is Pleased" "Defense Lawyer Calls it Vindication of Most Maltreated Players--State Attorneys Silent". The report takes most of the column & concludes on page 3. Despite the court... See More