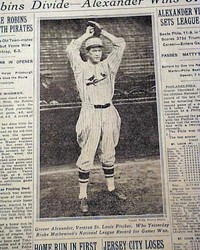 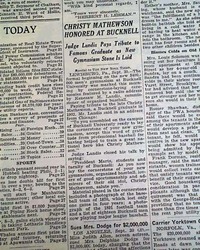 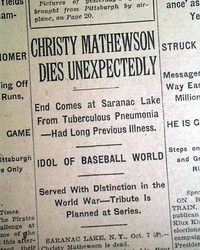 Shown is an original & historic old newspaper, offered to enhance your collectible interest: NEW YORK TIMES, Oct. 8, 1925 * Christy Mathewson death (1st report) * New York Giants pitcher * MLB baseball Near the top of the front page are one column heads announcing that: "CHRISTY MATHEWSON DIES UNEXPECTEDLY" "End Comes at Saranac Lake From Tuberculous Pneumonia--Had Long Previous Illness" "Idol Of Baseball World" "Served With Distinction in thee World War--Tribute Is Planned at Series". The article carries over to an inside page where is included a photo of him. Always nice to have notable events in history reported in this World famous publication. Also lengthy reporting on game 1 of the 1925 World Series starting on the front page ans carrying over into the sport's section. Loads... See More 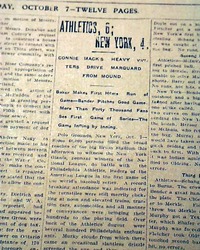 Shown are 5 original & historic old newspapers, offered to enhance your collectible interest: THE GLOBE, South Bethlehem, Pennsylvania, a set of five issues dated October 7, 8, 9, 10, 11, 1913, each containing on the front page a report of that day's World Series game between the Philadelphia Athletics and the New York Giants, the Athletics winning 4 games to 1. Christy Mathewson was one of the greats featured in this Series. Each issue complete in 12 or 16 pages, a bit loose at the spine, good condition.