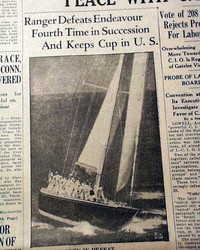 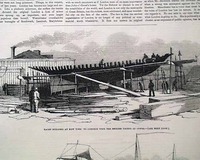 Offered is an original, historic, & collectible old newspaper: THE ILLUSTRATED LONDON NEWS, England, March 15, 1851 * 1st America's Cup close * Construction of yacht "America" The front page contains what is perhaps the earliest print of the American yacht named "America" to be found, captioned: "Yacht Building at New York to Compete with the English Yachts at Cowes". At this early point in its construction it was yet to be named, but it would be called the 'America', the namesake of the famous America's Cup race. Reference to this illustration is made in the August 9 issue, in which it is called the 'America'. There is a related article on page 2 titled: "New American Yacht" which notes in part: "...Her construction is on a novel principle...This is an original & spirited unde... See More 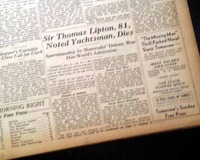