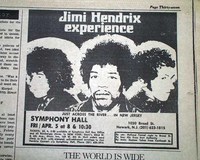 Offered is an original, historic, & collectible old newspaper: THE VILLAGE VOICE, Greenwich Village, New York, March 14, 1968 * Ads for two different nearby venues * Tour which Rolling Stone Magazine places in the top 5 of all time * Only two days prior to Jimi Hendrix's famous midnight performance at Cafe Au Go Go in Greenwich Village "The Jimi Hendrix Experience" worldwide tour is considered among many to be one of the greatest tours of all time. This iconic newspaper from Greenwich Village contains not one, but two large ads for performances to be held at nearby locations. Ironically, the Cafe Au Go Go, sight of one of Jimi's most noteworthy "concerts", did not advertise his appearance which occurred a mere 3-days later, even though it was common for them to advertise their sche... See More