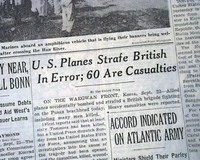 Offered is an original, historic, & collectible old newspaper: THE NEW YORK TIMES, September 24, 1950 * Battle of Hill 282 * P-51 Mustangs * Korean War The front page has a two column heading: "U. S. Planes Strafe British In Error; 60 Are Casualties" First report coverage on the U.S. air strike on British troops by mistake. Always nice to have notable events in history reported in this World famous publication. Other news, sports and advertisements of the day throughout which much more on the Korean War. Complete 1st section only with all 108 pages, rag edition in nice condition. wikipedia notes: The Battle of Hill 282 took place on September 23 during the Korean War, and involved the 1st Battalion Argyll and Sutherland Highlanders in an assault on this position as part an ... See More 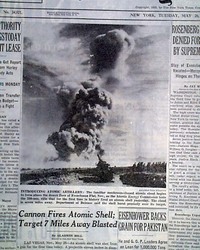 Shown is an original & historic old newspaper, offered to enhance your collectible interest: THE NEW YORK TIMES, May 26, 1953 * Upshot-Knothole Grable - Nuclear Artillery Test * The only one of its kind ever tested within the United States * Great front-page coverage with photo The front page tells of the one and only Nuclear Artillery Test (Upshot-Knothole Grable) ever conducted in the United States: "Cannon Fires Atomic Shell; Target 7 Miles Away Blasted," with photo and considerable inside related coverage (page 18). The inside article has a mini-head: "Would Favor Use in Korea." Yet another article has: "Baby Atom Pile Solves Many Nuclear Problems." Other news, sports and advertisements of the day are present as well. Complete with all 60 pages, rag edition, in excellent con... See More 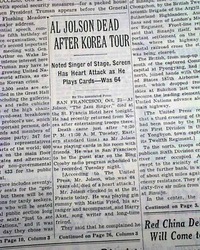 Shown is an original & historic old newspaper, offered to enhance your collectible interest: NEW YORK TIMES, Oct. 24, 1950 * Al Jolson death (1st report) * "The Jazz Singer" fame * Singer - comedian actor Just below the fold on the front page are one column heads: "AL JOLSON DEAD AFTER KOREA TOUR" "Noted Singer of Stage, Screen Has Heart Attack as he Plays Cards---Was 64" with text which carries over to page 26. It is on page 26 where the bulk of the report is found including a much larger headline: "Al Jolson Dies in San Francisco After Tour of Korea" and two photos of him, on in Black-face (see). Complete in 60 pages, this is the "rag edition" printed on very high quality newsprint primarily for institutional holdings. Great condition.