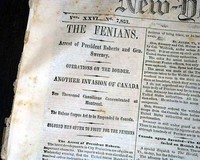 Offered is an original, historic, & collectible old newspaper: NEW YORK TRIBUNE, June 8, 1866 * Fenian raids in Canada The top of the front page has one column headings: "THE FENIANS" "Operations On The Border" "ANOTHER INVASION OF CANADA" "Ten Thousand Canadians Concentrated at Montreal" and more. Lengthy text. Other news of the day soon after the end of the Civil War. Complete in 8 pages, minor spine wear, nice condition. 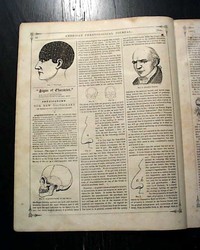 Offered is an original, historic, & collectible old newspaper: AMERICAN PHRENOLOGICAL JOURNAL, & LIFE ILLUSTRATED, New York, February, 1865 * Uncommon title Phrenology is a theory stating that the personality traits of a person can be derived from the shape of the skull. Although holding no validity today, it was a popular science in the mid-19th century and this periodical focused on it. The ftpg. has prints of: "Great Surgeons of the World" with a phrenological analysis of them. Several more inside as well as noted in the photos. The issue is complete in 32 pages, 9 1/4 by 11 1/2 inches, very nice condition. 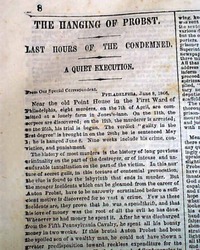 Shown is an original & historic old newspaper, offered to enhance your collectible interest: NEW YORK TRIBUNE, June 9, 1866 * The Dearing family murders * "Murder by gaslight" * Antoine Probst execution The back page has a one column heading: "THE HANGING OF PROBST" with subheads. (see) Lengthy text takes up almost 2 full columns. Other news of the day. Complete in 8 pages, minor margin wear, nice condition.