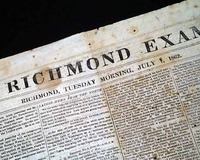 Offered is an original, historic, & collectible old newspaper: DAILY RICHMOND EXAMINER, Virginia, July 1, 1862 * Seven Days' battles * General George McClellan * Rare Confederate title Not only a nice Confederate newspaper but one from its capital as well. Most of the front page is taken up with various reports on the Seven Days' Battle with heads & subheads including: "The Richmond Lines--The Retreat of McClellan Towards James River--Critical Situation of His Army" "Incidents of the Contest--Scenery of the Battle Fields, etc." "Latest News From the North which includes three dispatches, each signed in type: G. B. McClellan; "McClellan's Dispatches in the North" "The Yankee Despotism in Norfolk" "Mr. Lincoln Makes A Speech" "Lincoln's Mysterious Journey to West Point--Object of Hi... See More 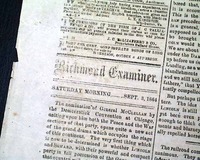 Shown is an original & historic old newspaper, offered to enhance your collectible interest: RICHMOND EXAMINER, Virginia, Sept. 3, 1864 * General George McClellan * Presidential nomination * Rare Confederate title Not only a very nice newspaper from the Confederacy, but from its capital as well. The ftpg. has: "The War News with several subheads from various fields of operation: "From Atlanta" "From Mobile" "From Louisiana" and "From Charleston". Also on the ftpg: "Retaliation" and "The Battle of Reams" "City Intelligence" and a couple of items with small heads: "Life in the Trenches Before Atlanta" & "A Woman Soldier". The bkpg. has a lengthy editorial which begins: "The nomination of General McClellan by the Democratick Convention at Chicago uniting upon him both the Peace an... See More 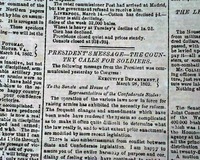 Shown is an original & historic old newspaper, offered to enhance your collectible interest: DAILY RICHMOND EXAMINER, Virginia, March 29, 1862 * Jefferson Davis calls for more troops Page 2 has an interesting editorial which considers the choice of an emblem for the Confederate States of America (see). Also on page two is; "President's Message--The Country Calls For Soldiers" which is signed in type: Jefferson Davis. Also: "The Winchester Battle" "North Carolina" "The Latest Northern News--Movements & Spirit of the War" "General McClellan's Address to the Army of Potomac" "The Military Censorship of the North" and more. Page 3 includes: "Victory In Texas" "Yankee Promises" "much reporting from: "The Confederate Congress" and other items. The back page has a lengthy list of Acts f... See More 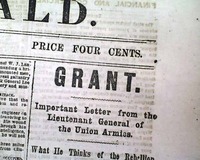 Shown is an original & historic old newspaper, offered to enhance your collectible interest: NEW YORK HERALD, Sept. 9, 1864 * Gen. George B. McClellan * Presidential nomination acceptance * Clinton, East Feliciana Parish , Louisiana Among the ftpg. column heads are: "CANBY" "Expedition from Baton Rouge & Natchez" "Clinton, La., In Our Possession" "The Rebel Ram Nashville Blown Up" "GRANT" "Important Letter from the Lieut. General of the Union Armies" "What He Thinks of the Rebellion & Its End" which is signed by him in type: U.S. Grant (see); "Sheridan" "The Presidency" "Tender of the Nomination to General McClellan" and more. Eight pages, minor loss at the blank spine margin, nice condition.