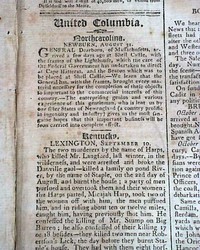 Offered is an original, historic, & collectible old newspaper: THOMAS'S MASSACHUSETTS SPY OR WORCESTER GAZETTE, Oct. 9, 1799 * Alexander Hamilton during Quasi-War Page 3 has a report concerning the construction of a light house at Shell Castle and at Cape Hatteras (see). Also reports from New York, Pittsfield, Worcester, Boston and Lexington. The back page has a nice "War Department" notice mention that: "All officers...who are...absent from their commands are required...to report themselves by letter to Major General ALEXANDER HAMILTON..." with a bit more. This is the Alexander Hamilton who served again in the military during the Quasi War. Four pages, some damp staining, generally good condition. 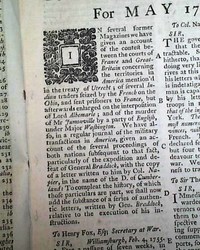 Offered is an original, historic, & collectible old newspaper: GENTLEMAN'S MAGAZINE, London, May, 1757 * Early Major George Washington * Jewish colony in the East Indies The first 2 1/2 pages have reports from the French & Indian War in America, including five letters written by General Braddock datelined Williamsburgh and Alexandria. In the introductory comments on the first page is mention that: "...concerning the territories in America mention'd in the treaty of Utrecht; of several Indian traders seized by the French on the Ohio, and sent prisoners to France, but afterwards enlarged on the interposition of Lord Albemarle; and of the murder of Mr. Jumonville by a party of English under Major Washington. We have also...given an account...of the expedition & defeat of General Bra... See More