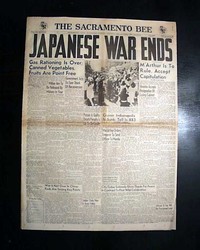 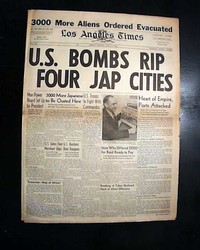 Offered is an original, historic, & collectible old newspaper: LOS ANGELES TIMES, April 19, 1942 * The famous Doolittle raid of Japan * U.S. Army Air Force B-25B Mitchell bombers * USS Hornet aircraft carrier The front page has a terrific banner headline: "U.S. BOMBS RIP FOUR JAP CITIES" with subheads and related photo. Nice for display. Nice to have in a West Coast publication. Incomplete issue containing the front and back leafs of the 1st section only, minor central fold wear, nice for display as such. wikipedia notes: The Doolittle Raid, on 18 April 1942, was the first air raid by the United States to strike the Japanese Home Islands (specifically Honshu) during World War II. By demonstrating that Japan itself was vulnerable to American air attack, it provided a vital mor... See More 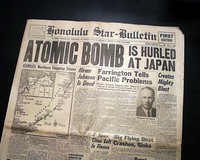 Offered is an original, historic, & collectible old newspaper: HONOLULU STAR-BULLETIN, Hawaii, Aug. 6, 1945 * Atomic bombing of Hiroshima, Japan * World War II ending - surrender nears * From the origin of U.S. involvement The front page headline announces the unleashing of the atomic bomb upon Japan in bold lettering: "ATOM BOMB IS HURLED AT JAPAN" with subhead. Nice for display and great to have from the city where Japan struck first (Pearl Harbor). Very rare as such. Complete with 16, pages, a little wear along the central fold, otherwise quite nice. 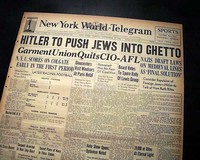 This issue is being offered as a piece of history. We at Rare Newspapers offer such items being mindful of George Santayana's famous quote (often attributed falsely to Winston Churchill): “Those who cannot remember the past are condemned to repeat it.”. Offered is an original, historic, & collectible old newspaper: NEW YORK WORLD-TELEGRAM, Nov. 11, 1938 * Crystal Night (Kristallnacht) * Night of Broken Glass * Persecution of Jews * Jewish ghettos announced A banner headline announces a follow-up to what became known as Kristallnacht, the "night of broken glass". "HITLER TO PUSH JEWS INTO GHETTO" with subheads: "Nazis Draft Laws On Medieval Lines as 'Final Solution' " "Consider Expulsion of Foreign Jews---Hitler to Talk at Vom Rath Rites". The article carries ... See More 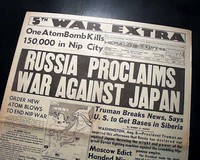 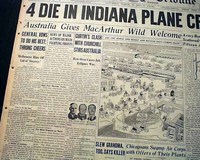 Offered is an original, historic, & collectible old newspaper: CHICAGO DAILY TRIBUNE, March 21, 1942 * General Douglas MacArthur * "I Shall Return" quote as 1st reported * World War II Philippines One of the front page headlines reads: "Australia Gives MacArthur Wild Welcome" after his departure from the Philippines, with the first column head: "General Vows To Do His Best; Throng Cheers" The report is from an interview with General Douglas MacArthur, supreme Allied commander in the Southwest Pacific. Under a subhead of: "Ordered to Attack Japs" MacArthur states: "...The President of the United States ordered me to break thru the Japanese lines & to proceed from Corregidor to Australia for the purpose...or organizing the American offensive against Jana. The primary purpose of t... See More 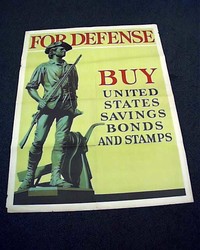 Here is a huge and I'm assuming very rare World War II poster that measures 4 feet, 8 inches (56 in.) x 3 feet, 6 inches (42 in.) that shows a statue of a colonial minuteman holding a rifle with his hand on a plow titled: "FOR DEFENSE; BUY" in red lettering then: "UNITED STATES SAVINGS BONDS AND STAMPS" in green lettering within a lighter green background. We found this poster within a collection of World War II newspapers we recently purchased. I noticed that this poster has been reprinted into a smaller version for souvenir purposes which has additional print along the bottom which reads: "On Sale At Your Post Office Or Bank". This statement does not appear on this original larger version. Along the bottom blank margin in very small print is: "U.S. Government Printing Office" : 1941" ... See More 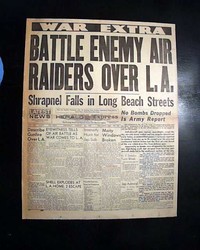 Offered is an original, historic, & collectible old newspaper: HERALD EXPRESS, Los Angeles, Feb. 25, 1942 * Battle of Los Angeles * World War II - WWII * INCOMPLETE ISSUE Simply a nice issue for display on what is known as the "Battle of Los Angeles". The front page has as quite large & dramatic headline: "BATTLE ENEMY AIR RAIDERS OVER L. A." with a smaller banner heading noting: "Shrapnel Falls in Long Beach Streets" with subheads. This event was a curious incident of World War II, the result of a rumored attack by the Japanese upon the coast of California. It was ultimately a false alarm attributed to a case of "war nerves" likely triggered by a lost weather balloon and exacerbated by stray flares and shell bursts from adjoining batteries. Incomplete issue containing the f... See More 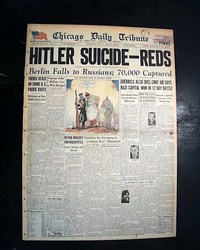 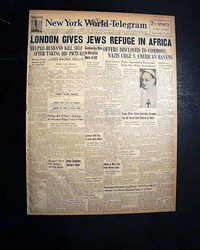 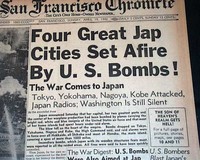 Offered is an original, historic, & collectible old newspaper: SAN FRANCISCO CHRONICLE, April 19, 1942 * The famous Doolittle raid of Japan * U.S. Army Air Force B-25B Mitchell bombers * USS Hornet aircraft carrier The front page has a nice headline that reads: "Four Great Jap Cities Set Afire By U. S. Bombs" with subheads. (see) More on pages 10 & 11 with some related photos and map. This was the famous Doolittle raid on Japan. It was not known at the time that James "Jimmy" Doolittle was involved due to secrecy. Always nice to have notable events in history reported in this World famous publication. Complete with all 30+ pages, light toning at the margins, small binding holes along the spine, generally nice. 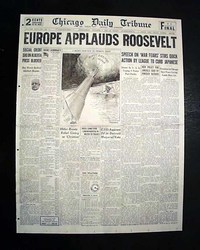 Offered is an original, historic, & collectible old newspaper: CHICAGO DAILY TRIBUNE, Oct. 6, 1937 * President Franklin D. Roosevelt * Quarantine Speech (1st report) * Best title to be had ? (rare) The front page has great banner headline concerning what is known as F.D.R.'s Quarantine Speech: "EUROPE APPLAUDS ROOSEVELT" with subheads: "Speech On 'War Fears' Stirs Quick Action By League To Curb Japanese" "President in Chicago Says Peace Loving Lands Must Act". With this historic speech Roosevelt suggests an international quarantine of the aggressor nations as an alternative to the political climate of American neutrality and non-intervention that was prevalent at the time. Although not specifically named, the countries implied were Italy, Japan, and Germany. Page 2 has the f... See More 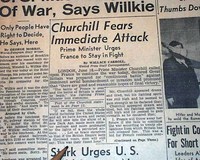 Offered is an original, historic, & collectible old newspaper: NEW YORK WORLD TELEGRAM, June 18, 1940 * Winston Churchill's famous speech * "This was their finest hour" Front page has a two column heading: "Churchill Fears Immediate Attack" with subhead. (see) This report carries over to page 3. Pages 13 & 14 has the full text of Churchill's famous speech to the House of Commons in which he concludes with the famous passage: "...Let us therefore brace ourselves to our duty and so bear ourselves that if the British Commonwealth and Empire last for a thousand years, men will still say This was their finest hour". (see) Complete in 32 pages, light toning at the margins, small library stamp within the masthead, small binding holes along the spine, generally very nice. 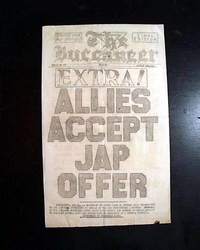 Offered is an original, historic, & collectible old newspaper: THE BUCCANEER, Okinawa, August, 12, 1945 * Very rare Okinawa occupation publication * Post Battle of Okinawa Japan military issue * Surrender of Japan very close A crude, typewriter-set newsheet printed under less than ideal situations at a military came. Such were typical during WWII. Most of the ftpg. is taken up with: "EXTRA ! ALLIES ACCEPT JAP OFFER". Most of the bkpg. is related text. This issue was printed less than 2 months after the end of the Battle of Okinawa, one of the bloodiest engagements of WWII. Japan lost as many as 100,000 soldiers while the Allies suffered 65,000 casualties including 14,000 dead. Civilians would bear the highest death toll of the battle with some 100,000--and perhaps as many ... See More