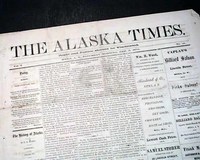 Offered is an original, historic, & collectible old newspaper: THE ALASKA TIMES, Sitka, A.T. (Alaska Territory), Feb. 5, 1870 * Very rare title This is a very rare newspaper which began in Sitka in 1869, the first newspaper published in Alaska (an earlier "Alaska Herald" from 1868 was actually published in San Francisco). It proved to not be profitable, so later in 1870 the publisher moved the newspaper to Seattle and continued publication on October 23. HistoryLink.org notes that: "...a few issues later, Murphy renamed the paper Territorial Dispatch and Alaska Times..." so issues with the title "The Alaska Times" from Sitka are very limited. The front page includes: "The History of Alaska", a continuing article, this being chapter XV. Page 3 has a lengthy item: "Editorial Notes ... See More 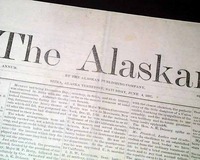 Shown is an original & historic old newspaper, offered to enhance your collectible interest: THE ALASKAN, Sitka, Alaska Territory, June 4, 1887 * Very rare Alaska Territorial issue Rarely are newspapers from Alaska found from before the Klondike Gold Rush of 1897 when interest grew dramatically. This newspaper pre-dates the gold rush by ten years. The format of the newspaper is much like other newspapers of the day, being four pages of small folio size (measures 13 by 20 in.). The front page has an interesting article about the Eskimos, titled: "From Kodiak" which begins: "The so-called summer season is rapidly advancing in this central region of Alaska, but winter seems to cling to us with highly disagreeable persistency..." with much more, taking over a full column and signe... See More 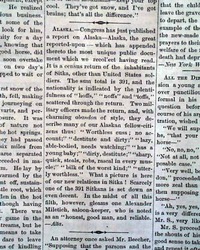 Shown is an original & historic old newspaper, offered to enhance your collectible interest: THE ALASKA TIMES, Seattle, Washington Territory, May 14, 1871 * Very rare W.T. issue This paper had moved to Seattle in 1870 and continued published under the same title despite no longer being in Alaska. Oswald's "Printing In The Americas" reports: "...he moved it to Seattle where he published two numbers only...", however I've had about a dozen issues all with different dates. Truly a rare item. An article on the front page is the census report on Alaska, which did not reflect very kind reporting of the people (see). Some foxing, irregular at the spine, some archival mended tears plus other margin tears. A very rare title from this early year.